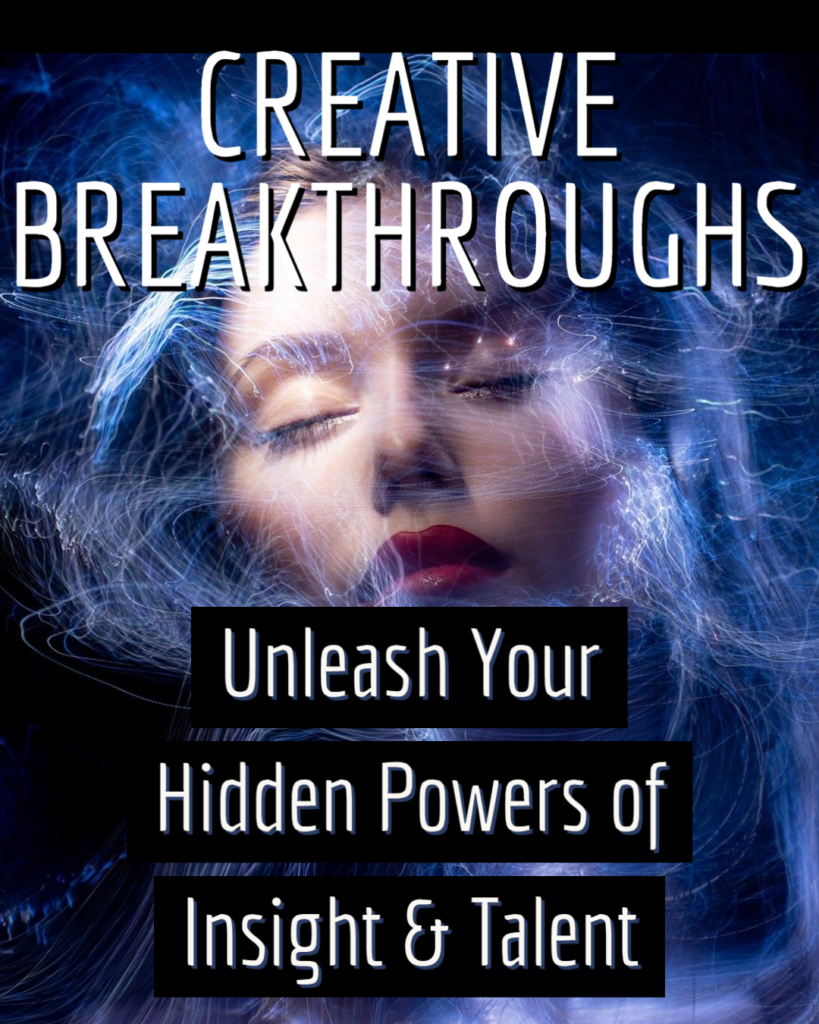 Lesson 2 – WHAT STANDS IN YOUR WAY?

In this lesson, you will learn how to eliminate ‘blocks’ to your creativity, and how three conditions can inhibit your creative expression and success.

Nobody is completely free from conflict. The conflicts which cause the most trouble in our creativity may center around self-esteem. You may have a conflict about your desire to fully express yourself and the fear of rejection and ridicule; or a conflict between what you consider to be your true value versus the reactions of others. A good way to explore and resolve these feelings is to write a conversation between the two conflicting elements—for example, your creative side and your logical side—or between your desires and your fears; between what you “can” do and what you “can’t” do; between the part of you that feels like a success and the part that feels like a failure; between perfection and imperfection.

Write the dialogue spontaneously, without censoring yourself. Let each side fully express its opinions and feelings until you come to some kind of resolution. What does each side see as the problems? As the priorities? Determining the root of the conflict and exploring all the feelings fighting for attention are the first steps toward resolving it.

The unconscious often speaks most eloquently through pictures; dreams are a dramatic example of this. Visualizing your block will enable hidden aspects of it to emerge from the unconscious.

As you picture your block, describe it in as much detail as possible. Expand upon it, let it speak for itself about its experiences and its past, examine its texture. Creatively expressing this visualization is another way to transform your block from a handicap into a tool. If you have difficulty forming a mental picture of your block, try free associating to it first and let the image form from that.

WRITE THE SITUATION FROM THE BLOCK’S POINT OF VIEW

In any conflict, you must understand your opponent before you can disarm or defeat him or her; and this is equally applicable to our battles with creative blocks. Blocks and resistances are messages; we must understand these messages in order to resolve the blocks. Once the concerns of the unconscious are uncovered and addressed, the block loses its purpose, its reason for being, and thus can be laid to rest.

A simple, direct way to decipher a block’s message is to, in effect, become the block and write out the situation from its perspective. Making your block a separate entity with its own voice gives you enough psychological distance from it that those thoughts and feelings that usually are submerged can come forth. At the same time, it enables you to directly experience and release the feelings surrounding your block. As with all of the exercises, it’s imperative to write spontaneously, without censoring yourself. If you have trouble getting started, ask your block, “Why are you here?” or “How do you perceive this situation?” and go from there. Often through this you can learn how your block operates and what it’s trying to do.

PICTURE YOURSELF IN A SITUATION YOU ARE APPRHENSIVE ABOUT, THEN REPLACE YOUR NEGATIVE THOUGHTS WITH POSITIVE ONES

The young woman was putting herself through college and was looking for a part-time job. The perfect one appeared in a newspaper advertisement. It was an assistant’s job in the admissions office of a university and would be an ideal way to subsidize her college education, since courses for employees were free. She made an appointment for an interview and was exceedingly nervous about the impression she would make.

The young woman realized she was always forming negative pictures in her mind whenever she had to meet a new challenge or situation. She decided to try something different, to substitute positive pictures for the negative ones. She was able to form a picture that totally replaced the previous ones, and this enabled her to make an excellent impression at her interview. The picture was a composite of all the positive impressions she had had of herself at different times of her life, fleeting though they were: as a pretty, gracious person, eager to do a good job, honest in her enthusiasm, and intelligent. It was through the image, the picture—not the words—that she was able to change her attitude. Forming a vivid picture in your- mind of positive past self-impressions can have a powerful influence on your performance.

CONJURE UP YOUR INNER CRITICAL PARENT

So much of our self-esteem is based on the attitudes our parents had toward us when we were children. This is crucial because our self-esteem, or lack thereof, can affect whether or not we persist in a creative goal. Many people discover when doing this exercise, that it is the negative voice of a parent or both parents that blocks them from success.

Think about a time, or times, in your life when your desire to do something – ordinary or not – was criticized by one or both of your parents. In this exercise, the idea is to tell a story of how negative comments affected your efforts to do something that was important to you. Then, recognize how they prevented you from doing what you wanted to do.

The insights you gain from this exercise can set the stage for profound change.

BRAG ABOUT YOURSELF, THEN HAVE A DIALOGUE WITH THE VOICE THAT DIPUTES YOU

Most of us have no problem belittling our creativity, and even ourselves on occasion; but complimenting ourselves is an entirely different story. Our self-doubts can make it difficult to trust other people’s appreciation of who we are and what we do and can keep us from truly valuing ourselves. This persistent questioning of our abilities subverts our motivation, spontaneity, and ability to take risks and experiment; resistances thrive in this atmosphere. Before we can regain our drained power we must confront these doubts.

Bragging about yourself and your work is a surefire way to get your self-doubts to leap out in full, sharp detail. Write out a thorough, comprehensive explanation of how you are the greatest person, lover, friend, writer, cook, mother, father, executive, etc., in the whole world. Go all the way with this: exaggerate, fantasize, even lie. Push past your inclinations to qualify these compliments or disparage yourself.

By the time you finish writing the first part of this exercise, an inner voice will probably be shrieking “liar” and other insults at you. Now address this voice by writing out a dialogue with it; allow it to fully articulate its anger and opinions. This is the voice of your barrier; the more it can express itself directly, the less need it has to act out. Intermixed with the insults can be helpful advice.

A leading cause of blocks and resistances is excessive self- criticism. Nothing kills a good idea faster than over- analyzing it before it hits paper. It’s so important to let go of the quest for perfection in the initial stages of creation. A fresh idea can always be reworked and refined; it’s a lot harder to breathe life back into an idea that’s been strangled to death before it’s found physical expression.

Most people are terribly afraid of doing something badly, something they don’t like. We feel we’ll carry this one thing around our necks like an albatross for the rest of our lives. The worst thing we can do in a creative endeavor is decide to abandon the idea. But while we intellectually know this to be true, we continue to rob ourselves of the initial experience of an idea and instead kill it by insisting on doing it perfectly the first time. By the time we put it down on paper, we’ve often lost sight of what the real gist of the idea had been and deprived ourselves of the opportunity to let the idea develop on its own.

Since the fear of doing something badly is a leading block to spontaneity, it’s important to surmount that barrier. One of the best ways to do that is to consciously do what you’re afraid of, what you’re trying not to do. Thus, if you pride yourself on being the life of the party, purposely tell a joke badly. If your need is to be extremely fashionable, dress casually instead. If you’re afraid of writing bad stories, force yourself to write the worst story you can. If doing a bad drawing keeps your pencil from the paper, see how ugly you can make your picture.

Several interesting things may happen. You may find that it’s not as easy to perform as badly as you imagined. Good outcomes and ideas may pop up despite your best (or worst) intentions. You may discover that your innate good taste or your expertise is so ingrained that it doesn’t allow you to be too awful. The harder you try to perform badly, the better the task or the work may become. A woman studying flower arranging remarked, “I tried to do bad the best I could and I just sat there for a few minutes; it wouldn’t come out bad. And I realized that it was only when I was trying to do well that it came out bad. I saw that it’s the mechanism of trying, and self- evaluating and criticizing, that makes something turn out the opposite of what you want.”

If you do succeed in doing something truly badly you’ll learn that it won’t kill you or ruin you; ideally you’ll be able to laugh at it and let it lead you someplace else.

Jump To the Creative Breakthroughs Menu